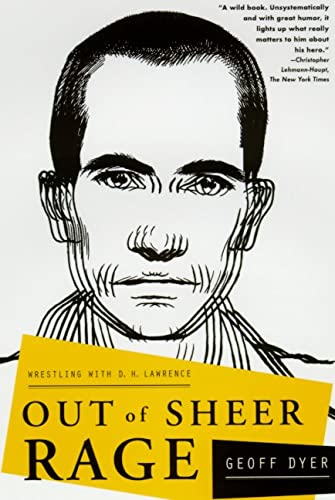 
Well, I just finished Out of Sheer Rage today. It only took me a few months to read it. To most, I would imagine that seems like a lot of time to be working on one book, but for me, that's pretty quick.

When I first picked up this book to read, I had no idea what I was getting myself into. I had just discovered the Boston Public Library, got myself a library card, and was looking for something to take out. I decided I wanted to read some sort of biography, so I hovered over towards that section. Once I found the shelf, I scanned the bindings of hundreds of books and selected this one because of its title and interesting cover design. It turns out the book isn't even close to being a biography. It's a very odd book, interesting nonetheless. I would explain it as a collection of stories by Dyer. These stories tell the adventures that Geoff Dyer went on while he was researching D.H. Lawerence.

Every once in a while, in between stories, there were some literature heavy texts that I found to be rather boring. These parts of the book dissected Lawerence's writing and explained it in great depth. Needless to say, I didn't retain much as I was just trying to advance to the next story.

All in all, I would rate this book a 3.25/5 stars. I enjoyed reading Dyer's analytical thoughts on his dilemma to write about Lawerence. Even though at some points there were some dry literature analyses, I always pushed through to the next story and found myself engaged until the end.